Welcome to another edition of #melaniethoughts! Today I bring you my inner struggle when working on any cosplay – whether it’s authentic enough. I’ve been working on a hobbit cosplay and had the thought last week of whether it was okay to use a sewing machine or whether that was cheapening the costume. I’m not sure if hobbits had sewing machines. Maybe old school versions that don’t require electricity? Either way, I was concerned that using a sewing machine on this costume would mean that it wasn’t real enough or good enough to pay proper tribute to the movie. I do realize this is insane, but I can’t help myself. 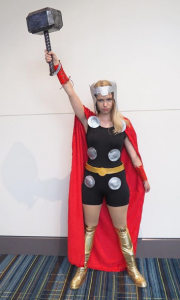 This is the struggle I have with cosplay. To an extent, we’re all trying to copy a persona, specifically through images. Though acting like a character comes into play, especially when cosplaying at conventions, most cosplays are truly appreciated through a visual medium, specifically photos or just walking around and striking poses. That’s why we make distinctions in our cosplays – check out Elizabeth’s comic book Black Widow and comic book Thor for examples. These two looks are very different from movie Black Widow and movie Thor. 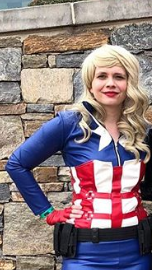 Another look is original characters. These have an element of creativity at play. Check out Brandy’s Lady Cap and Green Arrow for examples of original costumes that embody the essence of those characters but are her design. We have a number of different types of visual projects in the works, including some that are more creative in nature. I really like those because I can put my own spin on the character, and if I’m being creative there’s the relief that I don’t have to be authentic.

With this hobbit costume, I’m trying to be as close to accurate to the movie as possible, but in this, I struggle with this idea of authenticity. My hobbit is not going to be Sam or Frodo, but an everyday hobbit. So there is no picture I have to match completely, unlike for Dum Dum Dugan which I wore to the Renaissance Festival (in the South) (in August) (in accurate movie depiction costume pants) (which were heavy duty army camo pants called alpenflage). So to some extent, I clearly hate myself. But to another extent, I’m trying to capture something about these characters in my adherence to authenticity. So that brings me to last week when I was working on my hobbit costume, mixing several different color paints in an effort to match my skin tone, burning the crap out of my leg with a glue gun, and wondering whether

hobbits had sewing machines. The hard part about being authentic is how much more difficult it makes everything. I’m constantly researching to get the right thing – like the S buckles for Dum Dum Dugan or the orange bubble cloth for David S. Pimpkins.

I don’t have a ton of time to devote to this hobby. I have a number of other hobbies that I enjoy and engage in. I’m pretty limited on how much I can actually work on any one costume at a time since I also work full time. So this battle for authenticity is something I’m constantly running into, knowing that I can’t realistically spend 75+ hours on a single cloak, hand sewing and embroidering it until it’s perfect. What I try to tell myself is that it doesn’t have to be authentic if the choice I’m making is sacrificing authenticity for visual presence. Dum Dum Dugan needs alpenflage pants. But my hobbit doesn’t have to have a hand sewn cloak from Hobbiton. The lines between what’s authentic and what’s good enough are arbitrary. It’s not like I’m hopping a flight to New Zealand to christen this hobbit, to make them truly authentic. It’s not like I can ever go back in time to truly ingratiate my Dum Dum Dugan into history. It’s not like I can ever make a costume 100% authentic to the source material. So it’s okay to give myself allowances, even though that’s hard advice to follow. But if I have the time, I might also try and finish my hobbit cloak by hand, because there’s that voice in my head who won’t stop asking whether hobbits have sewing machines.